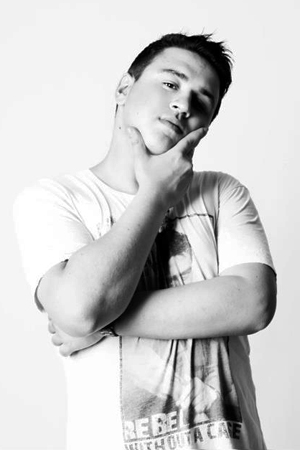 The Heritage: Tabula Rasa in the Tresor

Joshua Jesse Mettbach did not have a normal childhood or normal parents.

His father, Alexander Hacke, guitar and bass player, was a founding member of the legendary band Einstürzende Neubauten, together with vocalist Blixa Bargeld. Their raw industrial sound has influenced countless bands like Rammstein or Depeche Mode for over three decades and is known as one of Germanys most important music exports up till today.

Angela Mettbach, Joshua Jesses mother, is a celebrated figure in the Techno scene and a notorious bouncer of the hottest clubs in Berlin since the early 90ies. She decided on who was and still is allowed to enter the holy doors of the Planet, Tresor, E-Werk, Bar 25 and Katerholzig, besides producing music, organizing parties, and being featured in magazines and books.

Creativity was predestined for Joshua Jesse from the very beginning: with three years of age he was already playing hide and seek between the loudspeakers of the E-Werk during an exhibition presenting early “Techno art”.

In his Kreuzbergian home, there was a steady stream of famous DJs and musicians coming by to say hello and he would play catch with West bam, Woody, DJ T, Chrislo Haas or Inga Humpe. With six he was taught a backspin by Mike Mono, thus encountering the world of “Technics and Vinyl” for the first time.

Music was always there.

Joshua wrote his first hip hop lyrics when he was 15 and started producing tracks with his friends, free styling on the street, participating in contests and cutting his way through Berlin’s urban lifestyle. His interest in club & techno culture reemerged when he was 18, leading him back to his roots and he started going out to clubs like the Bar 25, Berghain or the Arena – those in which he would be Djing only a couple of months later.

The Mission: Move the Crowd

Then came the day that Joshua Jesse experienced a Marco Carola set in the Berlin Club Watergate and became an enthusiast of techno music. He embarked on an in depth study of the DJ performances of Carl Craig, DJ Sneak, Chez Damier, Ricardo Villalobos and Marco Carloa and soon after started DJing for the first time. The baptism took place at the “Delicious Doughnuts” a legendary after hour club in Berlin and his set was so impressive that he was asked to continue spinning there regularly.

Soon he attracted the attention of other club promoters and was invited to perform at the Arena, Levee, About Blank, Asphalt, Suicide Circus, Chalet and Rosies presenting a mix of hot Tech-House-beats and groovy Deep –House – Tracks mixed with a slight whiff

of Hip Hop. In 2012 he had his first performance at the renowned venue Watergate and two months later at the Kater Holzig (Bar 25). His set was so remarkable that he continued playing there as well, making the crow go wild with his eclectic power and resonance. In August 2012 Joshua was invited to perform in Amsterdam at the Vlla, thus initiating his international DJ career.

Together with his friend Willi Schuhmacher Joshua Jesse also founded a production team „Genie&Wahnsinn“ and an EP is to be released in late fall of 2012.